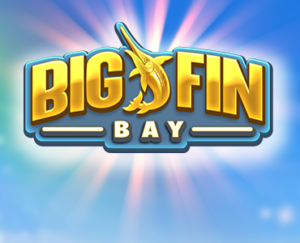 Big Fin Bay by Thunderkick is a video slot with six dynamic reels and 5040 ways to win in the base game. The number of ways to win is fixed; however, the distribution of symbols per reel varies on each spin. Get your bait ready and cast your rod as you reel in Mystery Wilds, Free Spins, Expanding Wilds with wins of up to 15040 times your stake in this high volatility slot Big Fin Bay with a decent RTP of 96.14%.

The game opens up with a magnificent scenic bay with buildings nestled against steep cliffs. The low paying symbols are the royals from 9 through to A, and the four wooden plaques with blue, green, red and purple fish are the mid-level symbols and include the Captain. The Wild is a golden Swordfish, and the Anchor is the Scatter.

Much of the gameplay in this slot rests on the Swordfish Wilds. The Wilds can land as single symbols but can also take on several roles at a time. During the base game and Free Spins, the Wild that is part of the winning combination turns into an Expanding Wild covering the entire reel and multiplying your win.

The Mystery Wild Feature can randomly trigger at the start of any spin during the base game. Up to three reels get transformed into Expanding Wilds Scatters. Three or more Scatters trigger the Free Spins Feature giving you up to 6 Free Spins, and a maximum of 36 Free Spins for 6 Scatters.